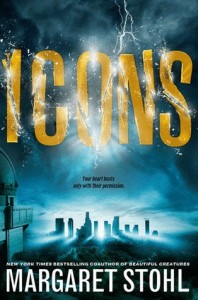 Your heart beats only with their permission.
Everything changed on The Day. The day the windows shattered. The day the power stopped. The day Dol’s family dropped dead. The day Earth lost a war it didn’t know it was fighting.
Since then, Dol has lived a simple life in the countryside – safe from the shadow of the Icon and its terrifying power. Hiding from the one truth she can’t avoid.
She’s different. She survived. Why?
When Dol and her best friend, Ro, are captured and taken to the Embassy, off the coast of the sprawling metropolis once known as the City of Angels, they find only more questions. While Ro and fellow hostage Tima rage against their captors, Dol finds herself drawn to Lucas, the Ambassador’s privileged son. But the four teens are more alike than they might think, and the timing of their meeting isn’t a coincidence. It’s a conspiracy.
Within the Icon’s reach, Dol, Ro, Tima, and Lucas discover that their uncontrollable emotions – which they’ve always thought to be their greatest weaknesses – may actually be their greatest strengths.
Bestselling author Margaret Stohl delivers the first book in a heart-pounding series set in a haunting new world where four teens must piece together the mysteries of their pasts – in order to save the future.
A YA dystopian novel by Margaret Stohl of Beautiful creature’s fame. This was without a doubt a book that stands own its own merit, it has no familiarity to any other book in this genre, and it is well thought out, well written and extremely readable.
I really enjoyed this book, it took a little while to relate to the characters, and as yet we still don’t fully understand just how special Dol, Ro, Tima and Lucas are, but that does not matter, because I have been swept along on an adventure that I am saddened has come to an end for now.
The story is told by Dol, and you get that sense of a strong character, with a deep underlying sorrow, but one that will do the right thing for her friends and for her world. Dol and Ro have a close relationship, as does Tima and Lucas, they both seem very much paired off, but by the end of the first book you get a sense that other relationships are beginning to develop.
Fortis is an interesting character and one that there is much to discover about yet, and also Captain Catallus, who I get the impression is going to end up with quite a role in this story, and also Doc
The plot was fast paced and moved along with surprising twists, making the book one that you just did not want to put down. With characters that were believable, that you felt affinity for and an alien invasion that you felt was realistic and did not overwhelm the storyline.
I highly recommend this book, not only to fans of Beautiful creatures and Margaret Stohl, but to anyone that enjoys a good read, fast paced and good plotline.
Please bring the second book out soon.